This week I’ve been exploring the various tools and techniques for weaving in your ends with knit and crochet. Today’s post is all about the Clover Darning Needles with Latch Hook Eye. There’s also discussions about many of the different types of sewing needles I often use for weaving in ends as well as Finishing Needles by Susan Bates and wool needles.

Clover Darning Needles with Latch Hook Eye are an interesting hybrid needle – part darning needle part latch hook of the variety used in making rugs with short pieces of yarn. They have a fairly sharp point and the smaller profile I was hoping for to use with thread and other fine yarns. I want to like these and yet, they have issues when using them to weave in ends with crochet or knit pieces. 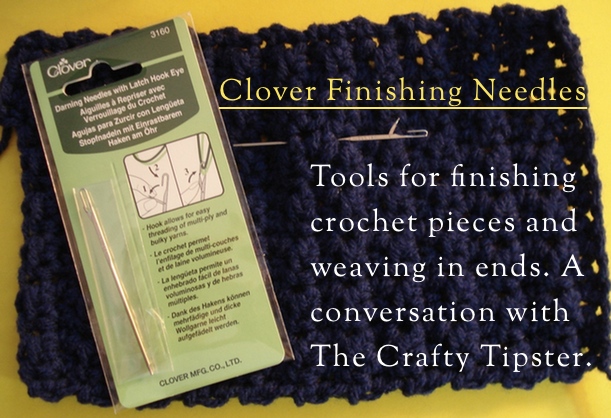 The Clover Darning Needles with Latch Hook Eye are sold by the pair. They are about 2.75 inches or 7cm long. The main part of the shaft is the closest, of all the aluminum finishing needles I’ve played with this week, to a traditional darning needle. Around 1/3 of the needle is flatter as part of the latch hook. The round part is just under 2mm wide, the flat part is about 2mm and the widest part of the hook section is 3mm.

I’ve not used it much but the latch part does seem to almost snap into place and stay closed nicely. It doesn’t make an audible click but it feels like it does.

These are a little harder to find than the Susan Bates needles, but they are an item that Amazon “ships and sells.” These can generally be purchased for $5-7.

What I Liked About These:

Why I Probably Won’t Use Them Often :

These needles are clever. I am, however, hesitant to use them after having them snag the yarn. I had hoped they would work with crochet thread. They generally do but are a bit big and rival my “Harpoon” (my favorite, but wicked, sewing needle) in length.  I had mixed results with textured yarns. But, it might be a great option for smoother yarns like Red Heart Super Saver.

I’ll be keeping mine, but, will probably lean towards using traditional sewing needles and the new wool needles I’ll be talking about in my next post on Weaving in Ends with Crochet.