This post is one of a series of posts about the various tools and techniques available to knitters and crocheters for weaving in ends.

Today’s post talks about Susan Bates Finishing Needles. My last post talked about Weaving in Ends with Sewing Needles and all of the different kinds of needles available. In my pursuit of the perfect tool for weaving in ends, I also reviewed the Clover Darning Needles with Latch Hook Eyes and wool needles. 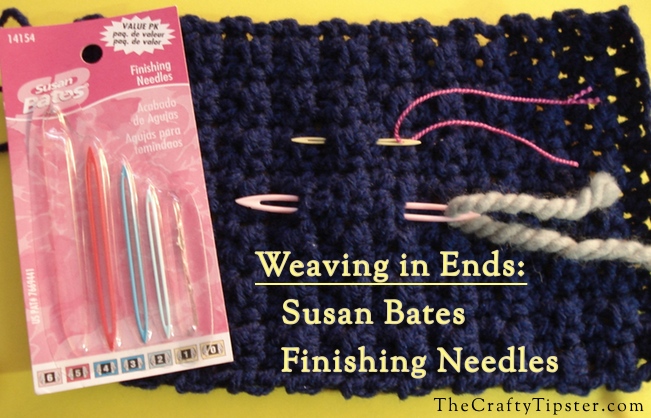 The package has 5 different sized finishing needles in the package (3.5 inches, 2 7/8, 2.5, 2 1/8, and 1 7/8). They are designed to work with yarns sized 0 through 6. They work a lot like the big-eye needles used in beading. Think two narrow pieces of plastic joined at the ends with the sides left unattached. They range in width from around 2mm to 7mm, according to my little plastic ruler. (For reference, an American dime is about 1mm thick.)

They’re made in China and available from Amazon and many craft stores. The generally run $5-7 or less with coupons and sales. A lot of crocheters, and knitters, love them. The day before I posted this article, one of my crochet Facebook groups had a number of people saying these were their favorites.

I truly do not like these and I will not be using them to weave in ends on my crochet projects.