I have not tried this vintage crochet doily pattern and after taking a quick look do not believe it is a good choice for a new crocheter as it looks somewhat complicated. If anyone makes this doily, please let me know how well written the pattern is and please consider letting me show off your work here (with full recognition as well). 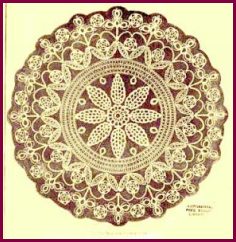 The crochet “Mat for Flower Vase” is one of several patterns from The Lady’s Album of Fancy Work. This crochet doily pattern, along with a number of other crochet patterns was first published in 1850.

This vintage crochet doily pattern suggests a particular brand of crochet thread and does not mention which size hook to use – I would use bedspread thread or a similar weight cotton and whatever hook size the thread manufacturer suggests.

The stitch names are slightly different then what we use today and the specific threads and colors may no longer be available.

CHAIN-STITCH OPEN CROCHET. —This consists of five or any uneven number of loops attached by a plain stitch to every third stitch of the foundation, and in the succeeding rows to the centre loop of the chain of previous row.

THREE CHAIN CROCHET.—Work a chain of three loops as in chain-stitch open crochet.

SINGLE CROCHET.—Insert the needle in the loops, and draw the cotton through this loop and that on the needle.

RIBBED CROCHET.—This is worked in a similar manner to double crochet, only that the under loop of the previous row is taken, and it is done in rows to and fro.

DOUBLE LONG STITCH.—This resembles long stitch, excepting that the cotton is twisted twice round the needle.

TREBLE LONG STITCH.—Twist the cotton three times round the needle.

SINGLE OPEN CROCHET.—This is a succession of long stitches, with a chain-stitch between each, missing one stitch of the foundation; in the succeeding rows the long stitch is worked between the two long stitches of the preceding rows.

For the rounds of open crochet work proceed thus: Commence on the point of one of the leaves, work 29 c s, d c into point of next leaf; repeat this all round, not making the c s too tight.—

2d round. D c into every stitch of this round.—

4th round. D c into every stitch of last round.—

6th round. D c into every stitch of last round.—

8th round. D c into every stitch of last round. Work on the inside of the first round of 29 c s a ring, thus: commence on centre, c s between the leaves, 16 c s, unite on foundation-stitch, d c twenty-four times round this ring; repeat these rings between every two leaves, making eight in all.

The crochet Leaves on the outside of the open Rounds.

— Commence on stitch opposite to the point of one of the large leaves. 18 c s, 1 l s into sixth stitch, * 2 c s, miss 2, 1 l s into third; repeat three times more from *. 1 s c into foundation-stitch, then 4 d c round first loop; 1 d c, 2 l s, 1 d c round next three loops, 1 d c, 4 l s, 1 d c round top loop; 1 d c, 2 l s, 1 d c round three loops on the other side of leaf; 4 d c round last loop. Make another leaf in the same manner, beginning at the same foundation-stitch. Fasten off. Then two more leaves exactly the same, opposite the points of all the large centre leaves. Then two more leaves opposite each of the d c rings inside the open rounds (which will be at an equal distance on each side from the others). There will now be thirty-two small leaves, two and two, the upper point of each leaf to be turned outwards, and to be tacked with needle and thread to the point of the next leaf, which it will meet easily. (Care must be taken to refer to the engraving for the manner in which the mat is to be finished, as it will greatly assist the explanations.)

2d round. 1 s c round first space, 3 c s, 3 l s, into same space, * 5 c s, miss 1 space, 4 l s into next space; repeat from * all round. Finish with 5 c s, s c into third stitch of 3 c s. Fasten off sixteen roses for the round. Place one of these roses between every pair of the leaves which proceed from the same foundation, and sew it at the edge to the third scallop of the leaves; then commence between the points of the leaves which were sewn together, * 24 c s, d c into centre of edge of small rose, 24 c s, d c between the points of the leaves; repeat from * all round, then 26 d c stitches round every 24 chain.