A mat five inches in diameter requires two and one-half yards of round web (made using two pegs on a spool knitter – how to spool knit).

Start sewing with the piece of worsted hanging from the end of the web. 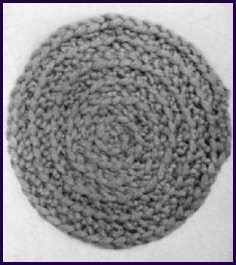 Continue alternating from right to left, taking up one stitch at a time except when it is necessary to widen; then sew two stitches of the web into one in the mat.

Run the end of sewing thread back in the sewing to fasten it.

When starting with a new sewing thread, put the needle in one inch back from where sewing ended and run it through the work to where the last stitch was taken.

The original author suggested using a spool knit cord made from two prongs on a spool knitter, using four prongs might make a slightly thicker cord and allow for your piece to make up quicker at the expense of having a slightly less thickly woven cord.

Uses for your Circular Mat