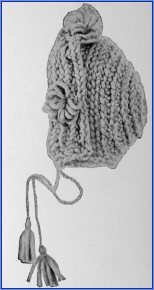 Another of the wonderful vintage spool knitting patterns from Mary A. McCormack, the Spool Knit Hat pattern comes with instructions for making a knit dolly hat and a knit child’s hat.

What little girl wouldn’t love having her favorite dolly’s hat or bonnet match her own?

The spool knit hat uses round web (how to spool knit).

Start with the end of the web and sew into a circular form for the crown. (See illustration A.)

The sixth row is brought down to within one inch of the center of the back.

Turn and sew around to within one inch from the center of the back on the opposite side. This will leave two inches free in the back of the hood.

Turn and continue sewing in this way for five rows, which will form the side of hood.

The remaining part of the web is then brought around the face of the hood and across the back, as one would sew a cord.

Finish with cord and tassel for tie-strings. A rosette of yarn may be made for the top or side.

This pattern could easily be made larger or smaller for other dolls by changing the size of the circle. To ensure it will fit, measure your circle on the crown of the doll’s head.

This is made much in the same way as the doll’s hood.

Make the back of the hood five inches in diameter, then turn the web and form the side.

Sew around to within four inches of the place of turning on the opposite side and turn again. So continue until the side is sufficiently wide to cover the child’s head.

Trim with rosettes or pompons made of the same material as the hood. Turn back the extended part and tack to the hood. Sew a pompon or a rosette of yarn over the top of the sewing stitch. For tie-strings, use cord and tassel, or ribbon.

The hood requires from twenty-five to thirty yards of round web cord.