For the last 6 months or so, I’ve been enjoying the company of a wonderful group of ladies on Tuesday afternoons at The Wool Room. If you’re ever in the Hendersonville, NC area and are looking for a wonderful yarn and weaving shop, you should really check it out. The owner, Mary Jo opens her shop for a few hours every week for knitters and crocheters to gather, enjoy each other’s company and share projects. Most of the ladies knit, some knit and crochet but I’m pretty much the only one who exclusively crochets.

What I love about the group is while all of us are passionate about beautiful yarns; there aren’t any yarn snobs. Newbies are welcome and everyone is willing to put down their own project and help someone else with theirs.

This week marks the second time where someone visited the shop hoping to find someone to repair a vintage afghan. Luckily for me, I was honored with the privilege of trying to fix them. Both afghans had special histories, as most do, and were indeed precious treasures worth saving.

Thankfully, as a newbie to the world of afghan repair, neither piece had significant damage. For the most part, the holes were created from thread that frayed and broke. So, they were small and didn’t require recreating panels or squares.

With the first one, I used a combination of yarn from my own stash and yarn scavenged from the afghan to use a sort of modified Russian join to darn the small holes.

I didn’t think to take any of the photographs of the first afghan repair, but, I did snap some before and after shots of the second one.

I think it’s one of the Mary Maxim kits from the 1970s. The original artist made panels of afghan crochet; joined them with single crochets and then cross stitched lovely flowers down several of the panels. It’s a masterpiece! 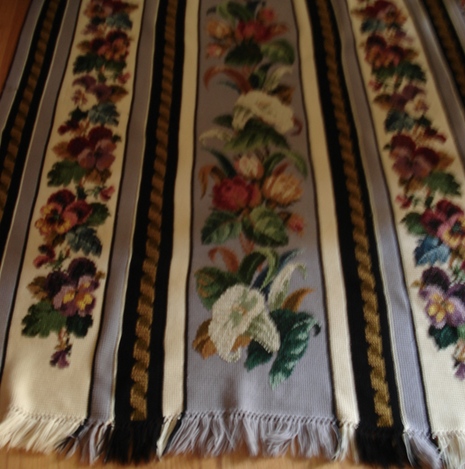 Unfortunately, I wiggled when I snapped this but you can get an idea of the amount of work that was done. The brown twists were cross stitched too! 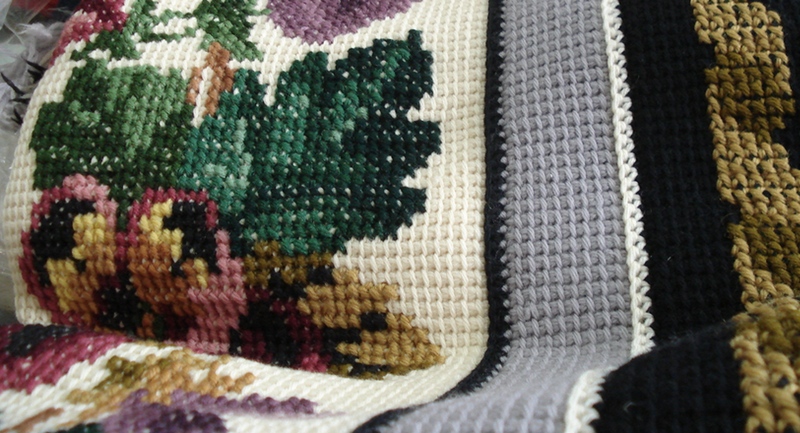 JoAnn’s to the Rescue

Our local JoAnn’s has some wonderful folks. One of the manager’s helped the afghan’s owner find an almost perfect match for the grey yarn – in a variegated roving type of thick yarn.

The matched section was about only 4 inches long and had to be split in half to match the thickness of the original yarn. That made it fiddly but the match is amazing considering the afghan is almost as old as me and the grey has a lot of purple tones mixed in it. Unfortunately, the roving yarn doesn’t have the distinct stranding of the original but, all and all, it exceeded my expectations. 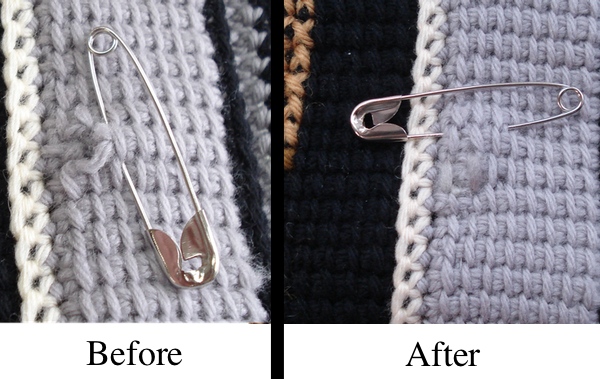 There were five places where the gray yarn had to be fixed and there was a bit of embroidery that was coming loose. Thankfully, it was on the grey background, so it was only a matter of securing the thread with another 4 inch strip of new yarn.

In two places, the white stripes of single crochet were just about frayed through and getting ready to come undone. I got lucky with those. I was able to undo some stitches and play yarn chicken until I had enough to cover the broken spot and firmly secure the ends.

Not sure if I’ve found a new calling or not.

So far, the repairs have been fairly small.

It took a number of tries to get this one the way I wanted it. Only after trying to join some of my own white/cream yarn did I finally realize, duh, just unravel some of the stitches – it’s single crochet. Ironically, undoing my first repairs created an actual hole where before there had only been a fraying thread on a stitch or two. But, in the end, you can only tell the repair was made from the back side where I secured the ends. Yay for an afghan with a back side!